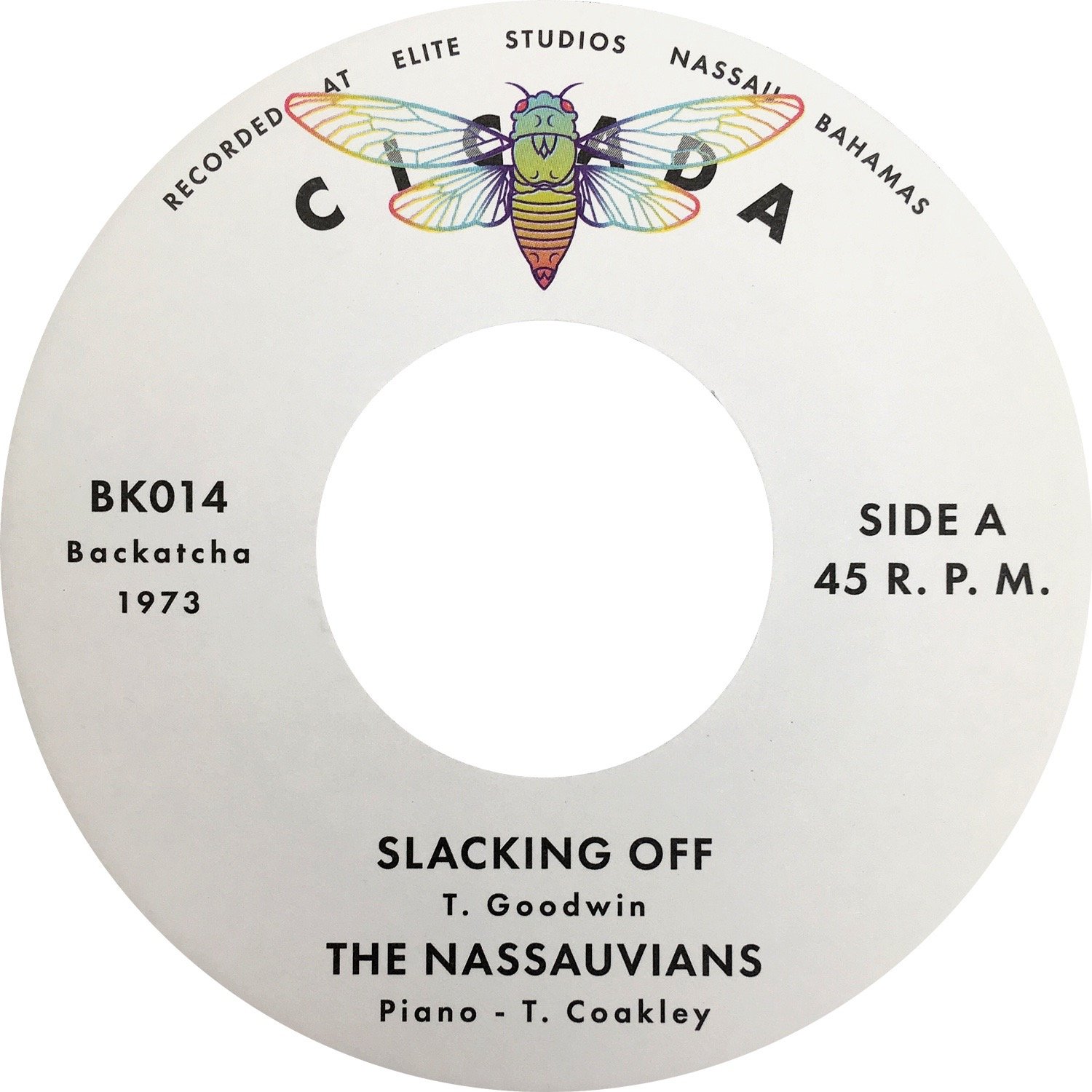 A local Nassau guitar giant, Tommy Goodwin, remained an original member of the Nassauvians throughout the bands active years and various phases. He recounts the session for 'Slacking Off' well. "We had a little studio time and came unprepared so we started jamming. That's why we called it 'slacking-off' because we were!"

The record is a sought-after soulful percussion-led gem that landed on the scene thanks to Jared Boxx. Renowned DJ and proprietor of New York's Sound Library, Jared unleashed countless titles onto want lists worldwide amongst beatheads and soul fans alike from his hard-earned vaults. For reference, check out his 2009 released mix 'Thanks For Waiting' opening up with The Nassauvians 'Slacking Off'.

Recorded at 'King' Eric Gibson's Elite Recording Studio in 1973, the track features Theo Coakley of T-Connection on keys and engineer Allen Mottershaw aka MOTT on solo guitar. Whilst Tommy was raised in the Bahamas, engineer Allen was originally from Kent, UK. He'd moved to the Bahamas bringing with him the studio know-how local musicians had vitally needed. Both a sound engineer and guitarist, MOTT's engineering expertise transformed Elite. By the mid-70s, Eric Gibson's pet project with a 6-track became a customised 24-track state-of-the-art pro-rig and recording hub for the major rock league escaping to the tropics.

Meanwhile, Nassau's local musicians were a melting-pot of styles, experience and influence. "Theo played the rhodes, Mott was on solo guitar, a 61 Less Paul Jr I think ... Cay Gottlieb might’ve played congas, not sure though, he was always in the studio. Mott... I miss him so much. He was a genius, he got all this equipment over from England and would experiment with different effects and things he built" says Tommy.

Recalling the original A-side called 'Daybreak' on the first Cicada issue, Tommy revealed a different line-up. "That was Cay's song. He wrote it and is singing and playing congas" he explains, laughing. See Tommy pictured with his original Fender 72 Thinline Telecaster that played on 'Slacking off'. "She’s tired!" he says, "I won a trophy for best instrumental after that record!"

Featured b-side 'The Time Is Now' is a previously unreleased AOR island recording made the following year with his friend Don Lepage, sung together with Tommy on guitar and Don on harmonica.

Both cuts now available on limited 7" from Backatcha Records for playback far and wide.

Where did you learn your craft as a musician and what are your main musical influences?

"I guess my main musical influence started in the mid-fifties with Buddy Holly, Chuck Berry, Elvis Presley and as I progressed I moved into whatever was current at the time. Then rock and roll pretty much up to the mid-eighties and then the only thing that influenced me or I was interested in was blues orientated music. Realistically, I like to write songs that aren’t about poor black people, I just like the rift in the country blues licks that I can play over them".

What drew you to living in the Bahamas?

"I arrived in the Bahamas at six months of age. I lived with my grandparents. My father was in the US Coast Guard at the time and after the war he moved back to the Bahamas with my mother who was Bahamian . We traveled every year. He was a gambler and worked with a number of wealthy people. He died in '69 of cancer. I was living at that time on my sailboat, that is when I met Eric Clapton and my life changed after that".

How did the Nassauvians start?

"The band Nassauvians started very casually amongst friends and as the time passes different members come and go. I guess I started the band and ran it for a while. We made good money working six nights a week playing pop songs which I got really tired of and that is when I met Don Lepage. We hung out and started playing music and then started writing on tunes, that’s when we got together with Eric (Clapton)".

The song 'Slacking-Off' has been a sought-after record on the funk soul scene worldwide for the last decade since a New York DJ put it on a mixtape and a new audience discovered it.

"The song 'Slacking Off' funnily enough started one day when I was painting a huge mural on a friends wall and I called it 'Slacking Off'. At that time I was playing a lot of music with Mott and the guys in the studio, I guess it was just one of those things... you just start to jam it and it takes off and Mott sat in the control room and recorded it. There was another piano player playing with us at the time, then one day Theo Coakley came in and asked Mott if he could jam over the tune. So Mott ask me to listen to it and what did I think? I said no question man, that’s it! As far as playing it live we did it without T, we sort of used it as a break jam song, never thought anymore about it. Then one day I got a call from a local radio station that said they had an award for me for best instrumental of the year. Then again, at that particular time I had won several trophies... Bicycle racing and sailing a boat that I had designed and built."

You mentioned you had a boat and later a plane, tell us about that.

"I lived on a sailboat for 10 years then sold it and bought an airplane, I flew sea planes for charter for 35 years whilst playing music at night with whatever band was happening at the time."

Did you record at Elite Studios a lot? Many great records were made there and well recorded with great techniques. Who was MOTT and where was he from?

"I spent several years in and out of Elite studio as Mott was my friend , Now and again I would go in and put something down".

You worked with Eric Clapton, how did all that come about?

"Eric came into the club one night while Don and I were playing. He and Patty Boyd came in just about every night with their crew and it took off from there".

"My best friend Don Lepage... we met one night in a marina. I was sitting on my sailboat at 3 o’clock in the morning and he heard me playing a guitar and asked if he could sit in and play some harmonica and I guess that’s how it all started".

You've been a guitarist most of your life. What are some of your favourite performances and recorded works that you've been involved with?

"That’s a hard question to answer. As you know, some gigs you hate and some you love and some you just have to do because you have to play. The truth in this is I guess that the best times were in the seventies when Compass Point Studio was open and so many recording artists came in and played with us. Guess we thought it would never end. But here we are, at the end."

Are you still performing and recording?

"I have a friend who has a small studio mostly for his stuff but every now and again I go out and put something down that I have written. I'll send you my version of Greyhound Bus, it’s just a rough but I like it." 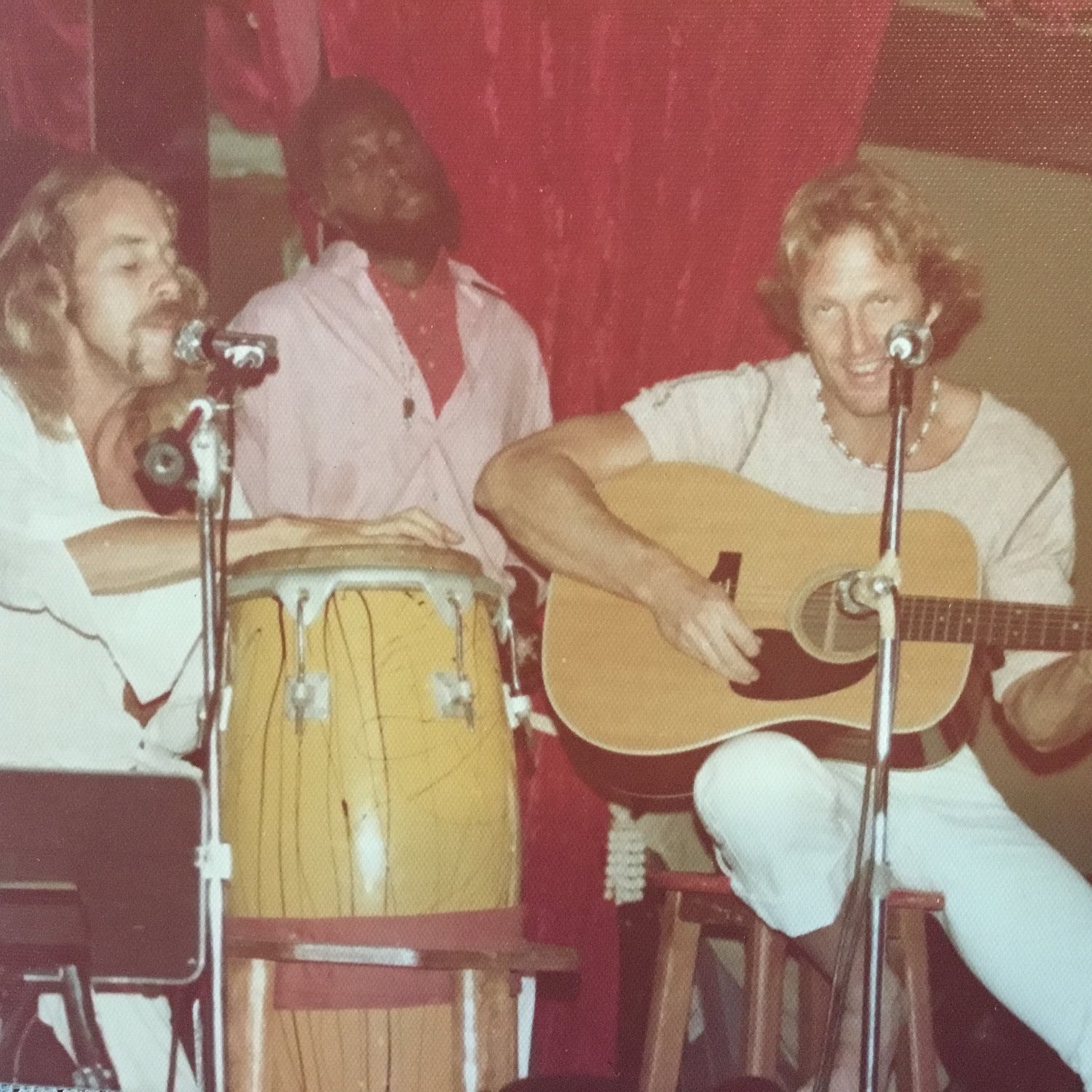 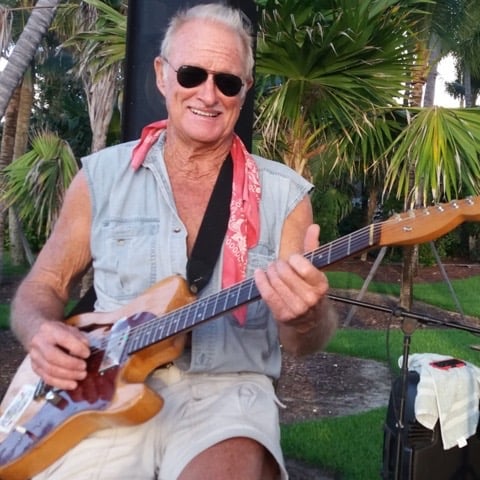 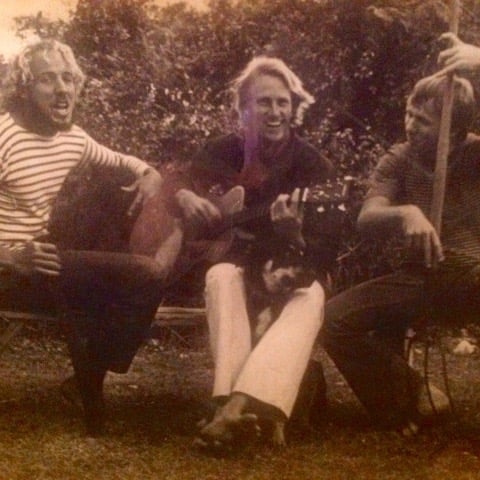